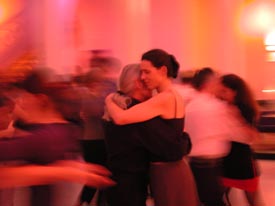 The tango was born in the slums of Buenos Aires, Argentina at the end of the 19th century. It emerged from the synthesis of European, African and Criollo rhythms and cultures – the close embrace of the waltz and polka and of the Milongas danced in the countryside of Argentina, the African rhythms of the Candombe, and the gallantry and bravado of the gauchos of the Pampas. The music evolved along with the dance. Tango lyrics were the poetry of the people and the characteristic sound became that of the German accordion-like bandoneon.

The tango of the poor barrios and brothels of Buenos Aires gave expression to the sexuality, combativeness, melancholy and frustration of those living at the margin of society. A city teeming with too many working men, and a dance which was not considered “polite” for women, led to men often dancing with other men, a tradition that still appears today, though often in an updated version, with men and women learning both parts.

Tango transcended its demi-monde confines when, in the early 1900, it became all the rage in Paris, long considered the Mecca of culture and style for Portenos. When it flowed back to Buenos Aires, it was enthusiastically welcomed into the cabarets and theatres frequented by educated and affluent men, and women. A softer, more romantic and nostalgic Tango open to all, regardless of class, age and gender, emerged.

Particularly important to the emergence of tango as emblematic of Argentina was the historical context in which it reached it zenith as a cultural expression and art form. In mid 20th century, Argentina was one of the richest countries in the New World and as such bred a proud and daring national identity. The charismatic political leader Juan Peron and his wife Evita, as well as the singer Carlos Gardel, epitomized the ethos of tango – the fusion of popular working class roots and worldly sophistication and power.

Throughout the remainder of the 20th century, Tango’s popularity has ebbed and flowed. In the ballroom dancing era, tango personified the chicness, glamour and elegance of the international haute bourgeoisie. Outside Argentina, the dance receded in the era of jazz, pop music and rock and roll. In the 1990s, Tango began to come back to the world stage through touring professional dance spectacles and tango-inspired films.

The complex culture of tango – its dance, its music, its lyrics, dress codes, its dance halls, with its community of milongueros and avant garde artistes, contains a mixture of emotional rawness, pungent bitterness and frustration, sublime sophistication and celebration of passion and love. Tango has discipline, elegance, tenderness, sexuality, openness, force.

Tangonova welcomes you to this world.