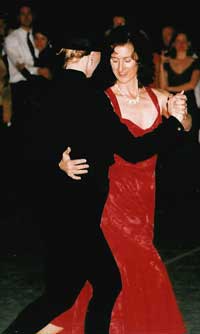 Margaret Spore discovered her passion for Argentine tango on a trip to Buenos Aires in 1994 and has been studying and teaching it ever since. She combines work on the improvisational structure of the dance with experiential exercises, fully engaging her participants in the sensual world of Argentine tango.

Following her graduate dance training at The Naropa Institute in Boulder Colorado, Margaret gradually immersed herself in the world of social dance, from ragtime tea dances to Cape Breton square sets. With its improvisational structure, intimate embrace and dynamic possibility of exchange between lead and follow, the Argentine tango was the first partner dance to fully capture her imagination. As a participant in two of the first Puente El Tango dance/study tours of Buenos Aires, Margaret initially trained with both milongueros (older traditional dancers) and the younger experimental dancers. A primary force in the early days of tango in Colorado, Margaret had an opportunity to work closely with a number of influential teachers including Daniel Trenner, Rebecca Shulman, Brooke Burdette, Pablo Pugliese, Florencia Tacetti, Juan Bruno, Lucianna Valle, Omar Vega, and Tomas Howlin.

An accomplished choreographer and performer Margaret has produced a number of solo and collaborative works, including her internationally acclaimed one woman show Tales from Tangoland.

Initially drawn to Nova Scotia as a member of the Shambhala community, Margaret offered her first tango workshop in Halifax in 1996 at Halifax Dance. She now makes Halifax her home. She hopes that Tangonova will plant the magical seed of tango in yet another great port city.